Many are the methods that have been used to decorate paper for bookbinding and endpapers. Often they are truly marbled (see our recent post about reproducing marble paper here). But other techniques were used that did not involve the marbling process, but instead the colors were applied directly to the paper itself. Still, many of these papers are mis-described by names such as ‘agate marble’ or ‘cocoa marble’. These techniques were commonly used especially in Germany and France in the 17th through 19th centuries and are known generally as ‘sprenkelpapier’ or sprinkled paper, which pretty accurately describes the basic process. The colors are directly sprinkled onto the prepared sheet, in essence a very simple process, though a number of chemical additives were used to produce the unusual effects such as halos around each drop. This makes the process far more challenging than it would initially seem, and minor variations in color recipes and application techniques can dramatically alter the results. 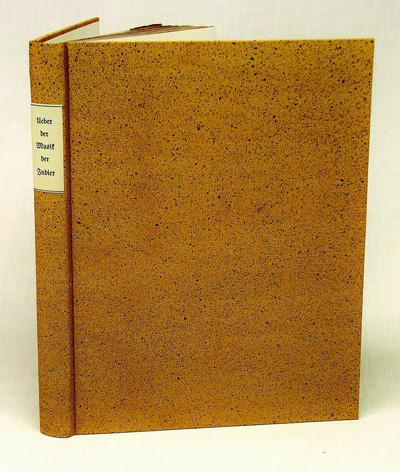 Two samples of period style bookbinding using the sprinkled papers are illustrated here. The first, known as ‘kiebitzpapier’ or ‘plover marbled paper’, uses basic black sprinkling on an ochre ground. It appeared in Germany in the 18th century as an obvious imitation of the same process that was used to sprinkle leather, but using less expensive paper in place of costly leather, which was often in short supply. Even then, the cost of binding was an issue and shortcuts were happily embraced. The resulting paper is often found in quarter or half leather bindings, or as in this example, as full paper over boards. As a side note, the groove at the joint between the boards and spine is also a hallmark of early German paper over board bindings. English paper over board bindings, based upon the construction used in full leather bindings, were tight to the spine and had no such joint (until much later with the development of cloth bindings in the 19th century).

The second example shows an ‘agate marbled’ pattern common in both France and Germany through the 18th and 19th centuries. It uses a several colors sprinkled onto a prepared paper producing edges of each drop that are soft and fuzzy. Here, fine blue dots were applied first and the color allowed to dry. Afterwards, a second color, brown, was applied in such a way that it would spread, while the green component of the mix would spread further yet, producing the halo. Once again our sample is period style bookbinding of full paper over boards that might have been produced by someone looking for a serviceable but less costly binding. Such sprinkled marbled paper was also used for half and quarter leather bindings, and commonly found on 19th century quarter cloth French bindings. Originally, these papers were produced by hand in each bindery. By the mid-19th century the demand for decorated paper was so great, it being used for many other things than books, that an entire industry arose to fill the need. With the development of color printing in the late 19th and into the 20th centuries, such hand decorated papers became one of the ‘forgotten arts’, now undergoing a great revival. 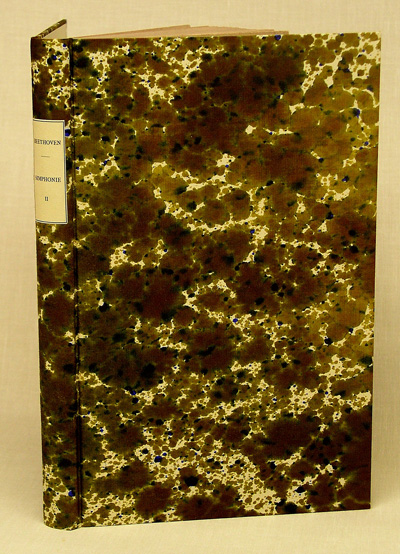