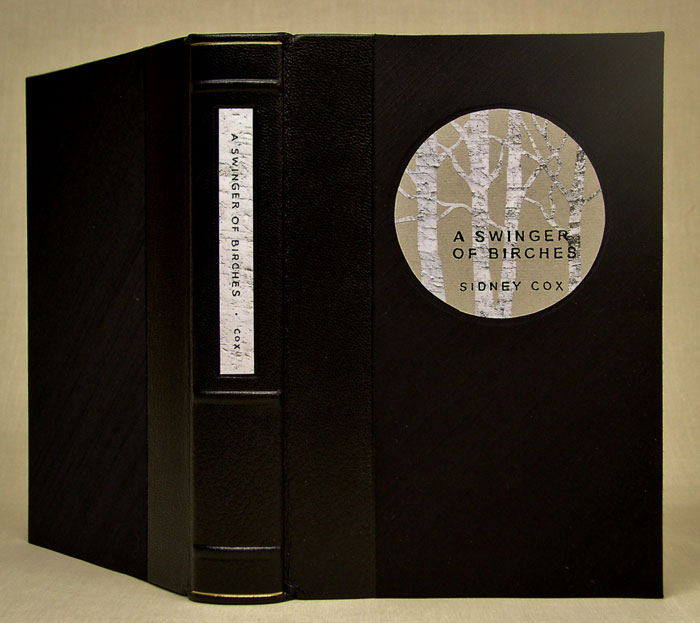 The quarter leather drop spine box with a rounded spine and raised bands for Robert Frost’s biography, inscribed by Frost.

This custom clamshell box made for a copy of the Robert Frost biography (inscribed by Frost himself), A Swinger of Birches by Sidney Cox, carries the birch theme into the decorative elements on the front board and spine. The client and I early on in our discussions of the project decided upon a circular motif with a birch theme. I drew the trees from a birch grove to create an interesting pattern. Originally, I thought it would be appropriate to actually make it out of birch bark, but the experiments yielded some troublesome results. While peeling birch bark might be OK on a souvenir pencil holder from your Adirondack visit, I wanted something more stable for a drop spine box that should long outlast us. In the end, I simply walked out the front door, took a close-up photo of a white birch trunk and made an archival ink jet print. I cut this out following the original birch grove sketch and adhered it to a gray paper circle. A calligraphic title was made, purposefully rough in texture, and this was stamped over the collage. The whole collage element was then pasted to a circular recess in the board. In a similar manner, the spine title was stamped on the birch bark print and laid into a recess in the spine leather.

Other elements of the box, perhaps not apparent in the photo, were modeled on another drop spine box in the client’s possession, one that came with a book he purchased of Wallace Stevens’ poetry. Notably, the walls of the trays were substantially thicker than usual, while the bottoms of the trays were beveled at an angle, making for an interesting relief profile. The cloth used for both the covering of the boards and the lining of the trays was laid on a diagonal rather than square as is typical. As the Japanese cloth has prominent and distinctive threads running through it, the diagonal weave stands out dramatically.

This drop spine box protects a unique copy of A Swinger of Birches. It also becomes an enticing prelude to the book itself.