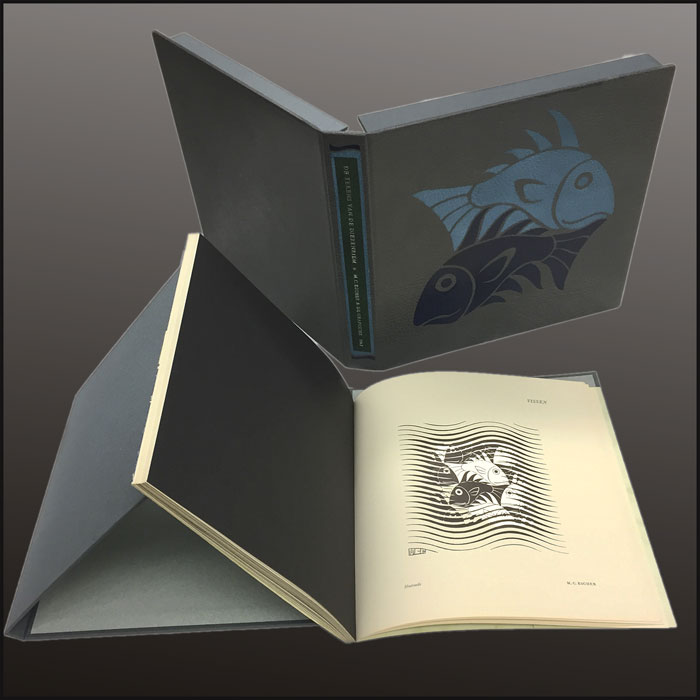 M. C. Escher’s print ‘Fish and Waves’ as it appears in De Tekens Van De Dierenriem together with the three-sided chemise and full leather box.

M. C. Escher’s final small-format print ‘Fish and Waves’ was included in the Dutch book De Tekens Van De Dierenrim (The Signs of the Zodiac) published in 1963. In it Escher and other contemporary Dutch printmakers interpreted the twelve signs. The owner of this copy of the book offers an appreciation:

“ ‘Fish and Waves’ was one of the last prints Escher made, and he brought a lifetime of art and technique into saying the most complicated stuff he had learned in a very simple form. Like Einstein’s equation connecting energy and matter, Escher has reduced the difference between figure and ground, between ‘this’ and ‘that,’ to their simplest terms, which are nowhere near as simple as they seem. White fish and waves mesh with the black fish and waves in utter harmony, much as perfect little atoms make up things that we see as quite individual and unique. Finding that perfection in apparent chaos is, for me, the greatest underlying and connecting theme in all of Escher’s work.”

The task presented was to create a full leather drop spine box that would be worthy of this important print. The book itself is a simple paperback affair, a bit fragile in its original construction. An interior chemise (folder) was created to both provide additional protection and to subtly announce that what is inside is important. The client suggested that perhaps the wave pattern would provide a basis for the design of the front board. Playing with that for awhile, I was finding it a little too low key so I moved onto the fish themselves. These are presented here not as an exact reproduction of Escher’s print, but more of a reinterpretation, created in leather onlays in light and dark blue on a gray leather ground, suggesting the cold northern ocean that perhaps might have inspired the artist. The wave pattern did, however, get a minor nod in the design of the label panel that appears in the spine. The type was stamped in silver rather than gold to continue the ‘coolness’ of the color theme. And I love the whimsical little smiles that Escher gave his fish. I wonder what they are thinking.

The design binding box for Escher’s ‘Fish and Waves’ in full leather.