Drop spine boxes are the go-to solution for complete protection for valuable books. Unlike a slipcase that exposes the spine to light, dust and air, the book in a drop spine box is fully enclosed, buffering atmospheric influences and saving it from shelf-wear or the occasional bump. In most cases a basic drop spine box does the job. But in some instances, there are additional accompanying materials that need to be preserved along with the book. Here are a few examples of boxes that have auxiliary pockets and folders to house all of it in an attractive and functional package. 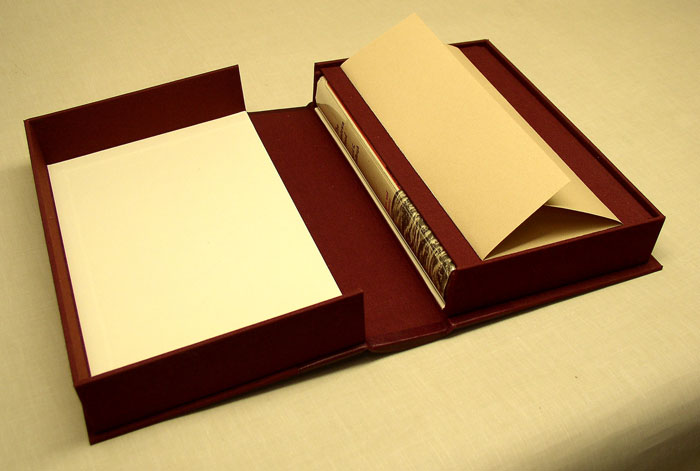 The drop spine box with the flap for folder holding two autograph letters in the closed position.

The first example illustrates a quarter leather/cloth drop spine box for David McCullough’s The Johnstown Flood. Accompanying the book are two autograph letters from McCullough to a descendant of a flood survivor. These are safely housed in a folder attached to a cloth-covered board flap that is hinged to the fore-edge of the box and rests on two ledges at the head and tail of the box. The photos show details of its construction. 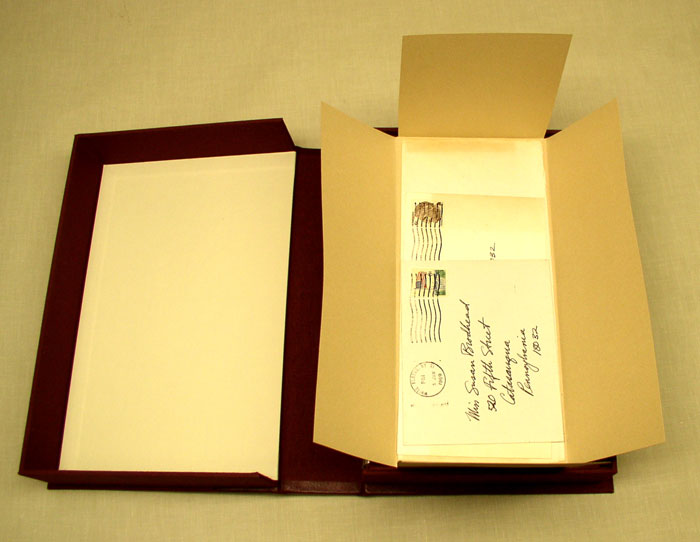 Here the flap is opened showing the two letters enclosed. 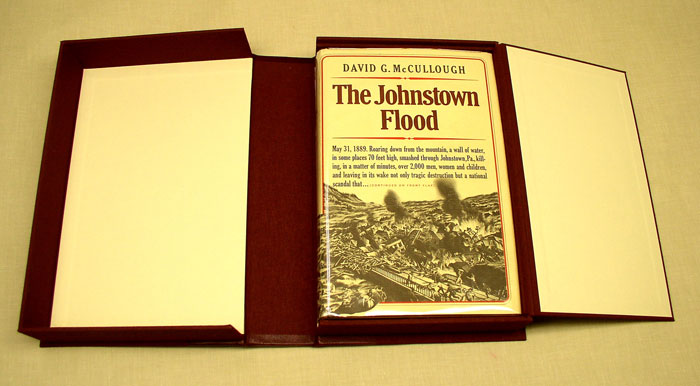 The inner view of the drop spine box showing the flap opened back to reveal the book that rests below. 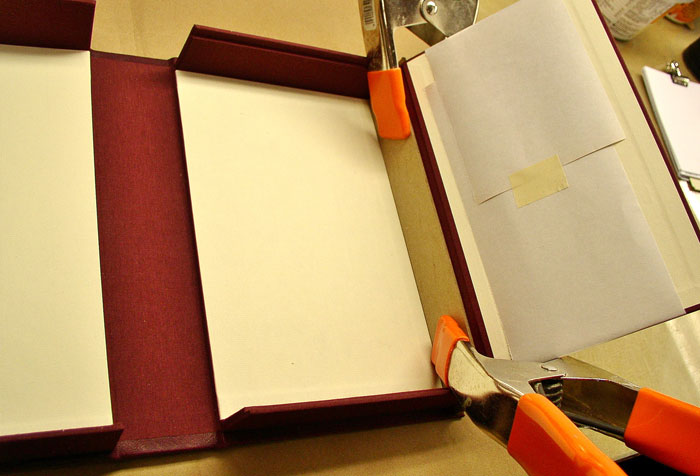 This detail of the drop spine box under construction shows the method of attaching the flat to the fore-edge of the box using a cloth hinge. Also seen at the head and tail of the tray or the ledges the flaps rests on to keep it in position. 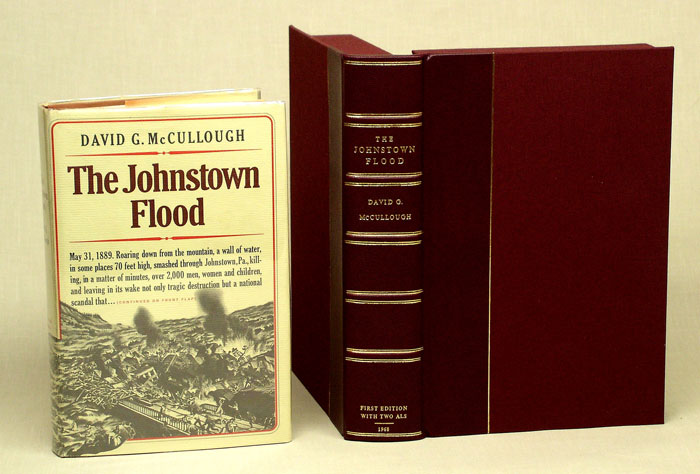 The second example is for a 1538 edition of the second volume of Aristotelis Opera. This is a large folio-sized book, nearly 9 ½ “ x 14 ¾” x 2 ¾”. All that remained of the original binding were small spine fragments with the original handwritten titling and a very deteriorated rear board of an unusual olive drab color. The latter, though, did have an important inscription. The book itself required some paper repair and sewing reinforcement to the opening and closing signatures which had become loose. It was then bound in quarter leather and cloth, chosen to compliment the color of the original board. 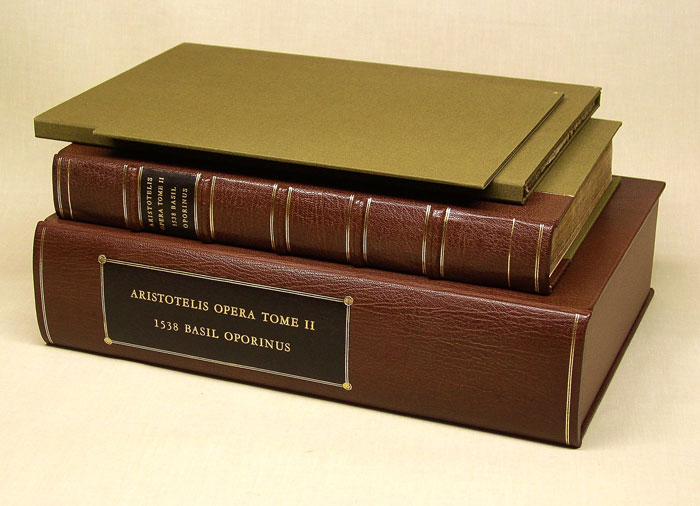 The drop spine box was constructed in full leather with the trays covered in the same olive cloth. In addition to the book, two three-sided chemises (folders) were constructed. The first housed the original board. This would rest in the base of the box under the book as it was the same size. The second, smaller folder was made to house the spine fragments which had been mounted on a sheet of cover-weight stock, along with a half-dozen pages of documentation regarding the book’s provenance. As this folder was smaller in size that the book, a pocket was made in the lid of the drop spine box into which it could slide. The photographs illustrate how the elements of the set nest together harmoniously. 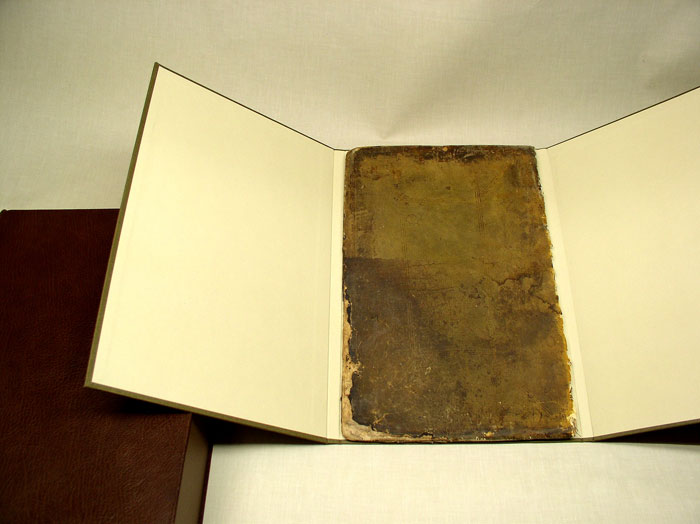 The original board resting in its own chemise. The board was in tattered condition so the loose material was consolidated to prevent further loss. No new material was added to it. On the paste down (not shown) is an important inscription showing the books provenance. 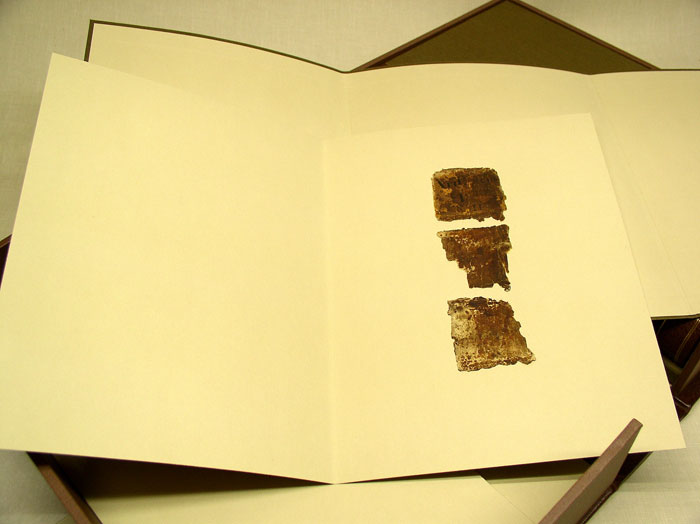 This is the remaining spine fragment from Aristotelis Opera that has been mounted to a folder of cover stock. It, together with several pages of documentation are housed in a chemise that tucks into a pocket in the lid of the drop spine box. 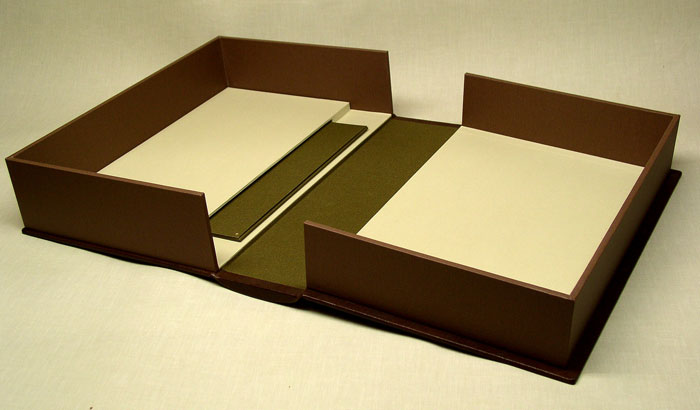 A view of the inner lid of the drop spine box showing the smaller chemise tucked into its pocket. 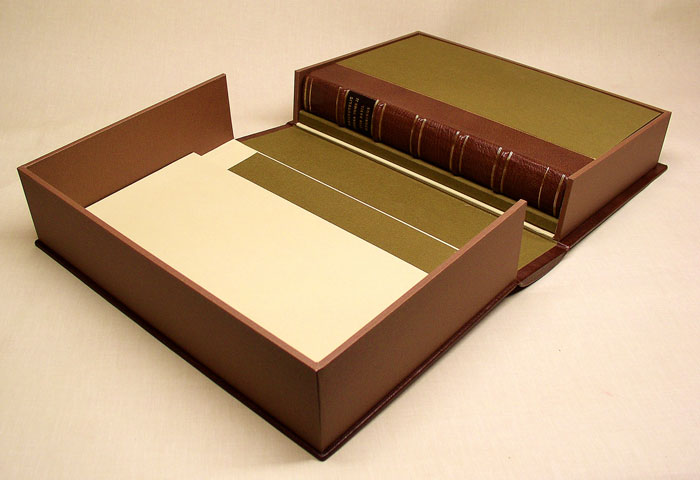 Another view of the opened box shows how it all nests together. The large chemise with the original board sits under the book while the smaller chemise in housed in a pocket in the upper lid.